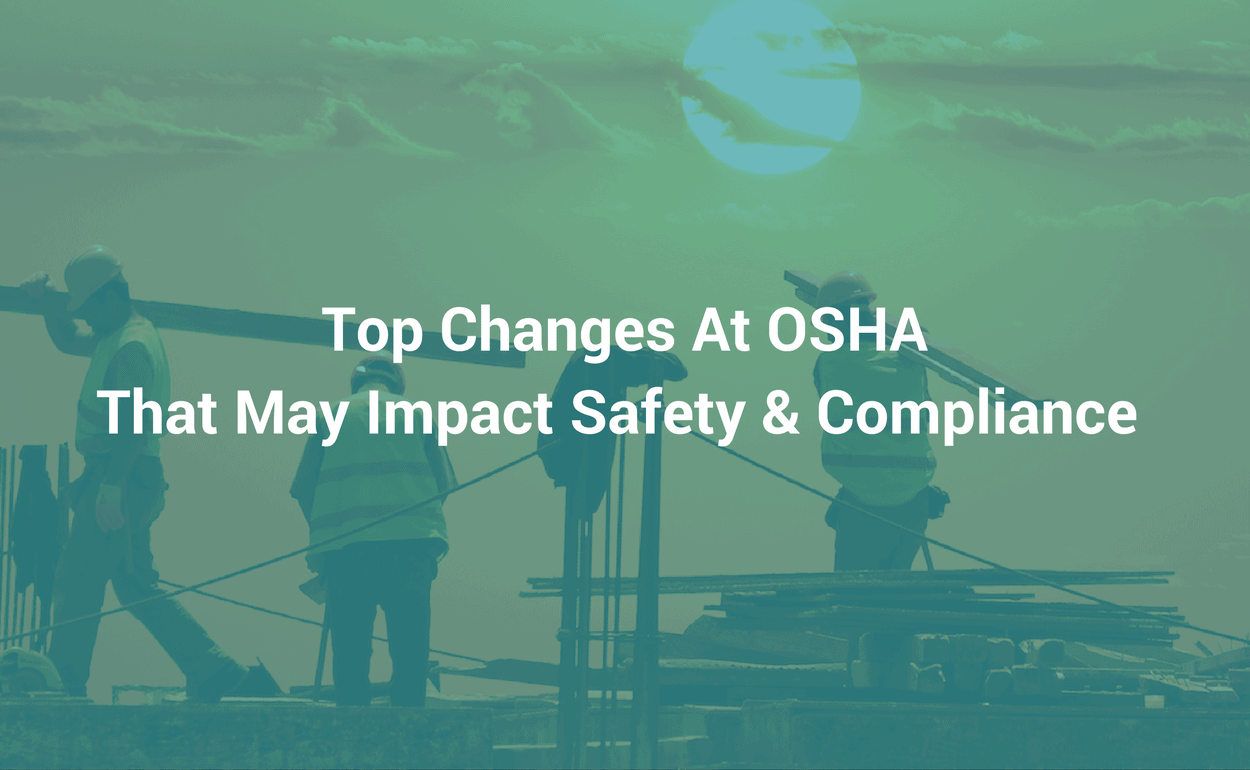 As federal OSHA moves in one direction, what will individual states do in the next year? That’s just one issue with OSHA that employers should be watching next year.

In a two-part blog series, we sat down with Eric J. Conn, Chair of the OSHA ● Workplace Safety Practice Group at Conn Maciel Carey LLP, to talk about significant OSHA issues employers should watch in 2018. (Get up to speed by reading part one here.)

Here’s what we learned employers should be following from OSHA in the coming months:

One of the biggest things employers are watching is how the enforcement philosophy of OSHA will change. “I’m going to be paying a lot of attention this year to what OSHA does on the enforcement front and on the compliance assistance front,” says Conn.

People will be watching to see what happens with such penalties and citations under the new administration. Even if they have less of an enforcement-heavy philosophy, that doesn’t mean there will be smaller penalties.

“One thing that we saw during the Obama administration was that the agency had more than doubled the percentage of violations that it characterizes as Repeat…What happens to those policies that are driving more repeat violations? Do we move in a different direction now than we have been over the last decade?”

Related to this is what happens with OSHA’s budget—since that has an impact on OSHA enforcement.

Currently, under the Trump administration, there has been a hiring freeze at OSHA. With about 4 percent of OSHA inspectors having left the agency in that time by natural attrition, they have not been replaced due to the hiring freeze. Time will tell what happens, especially if there are further cuts to the enforcement mechanism at OSHA.

“We will be paying close attention to the number of inspections that OSHA conducts, the man hours per inspection, and how much impact that has on the number of citations issued and the penalties that we see coming out of OSHA.”

Regardless of whether or not your company will see an inspector this year (or ever), it’s important to remember that while OSHA compliance is important (and required), it’s not enough.  If you simply comply with OSHA, you aren’t necessarily following safety best practices.  Most employers have the goal of providing a safe workplace, not meeting OSHA compliance.

On the flip side of that enforcement coin, watch what happens when it comes to compliance assistance and cooperative programs coming from OSHA.

Conn says he expects to see OSHA restoring the budget, personnel, and resources that are dedicated to this and the Voluntary Protection Program (VPP). While the VPP program had been diminished during the Obama administration, Conn expects a reversal of those policies. “I anticipate we will see an administration that values VPP, encourages participation in VPP, and clears some of the roadblocks that have kept applicants from getting into the program.”

“That’s a big signal of the direction the agency is going because the grain industry had been one of the most heavily scrutinized industries from an enforcement standpoint during the Obama administration.”

During the previous administration, there were active regional and local emphasis programs targeting grain handlers throughout the grain states, resulting in hundreds of enforcement inspections at grain elevators every year. The idea that OSHA has now entered an alliance with the National Grain and Feed Association signals a change in OSHA’s approach, says Conn.

“It’s a symbol for how they might handle other industries as well, where the agency acts more through alliances, partnerships, cooperation, collaboration, rather than just enforcement.”

Conn also would not be surprised to see greater investment by OSHA in compliance assistance documents—such as FAQs, compliance directives, letters of interpretation, granting of more variances—all aimed at greater collaboration, cooperation, and assistance, rather than just enforcement.

An area many people will be paying attention to is what happens with worker safety criminal prosecutions.

This was a very heavy area of emphasis during the prior administration: The Department of Justice’s Yates memos increased the focus of the government on criminal prosecutions for worker safety matters.

One focused on pursuing charges against individual managers, which meant finding opportunities to charge individuals rather than just corporations; which had a big impact on how and how many worker safety matters were investigated by the Department of Justice.

And then a second, more targeted memo focused the government’s resources on pursuing more worker safety criminal cases than they had historically, by finding opportunities to combine environmental charges with worker safety charges to pursue more cases. This was also used to bring heavier penalties down from a criminal context for worker safety matters.

“I don’t know which direction it’s going to go,” says Conn. “There is an effort underway to re-evaluate those memos, but Attorney General Jeff Sessions has expressed several times that he believes wholeheartedly in individual responsibility for crimes being favored over corporate responsibility, and has stated thus far that he does not intend to retire those Yates memos.”

Watch to see if any new memos are drafted, and whether or not those will have the same focus on criminal accountability for worker safety matters.

Employers will also want to be watching the various deadlines coming due in 2018.

For example, under the Walking-Working Surfaces standard, OSHA’s rule addressing slips, trips and fall hazards, there were a number of requirements that did not go into effect immediately. Several of those deadlines do kick-in in 2018. Silica and Beryllium standards have key deadlines that also come into play in the next year.

“The Electronic Recordkeeping Rule has round two of the data submission set for July 1, 2018, but we know there’s going to be an active rulemaking in that area.” The point is: employers should continue to watch and track what happens with those deadlines in 2018, since they will come with compliance requirements associated with them.

Learn more about how you can easily and quickly complete JSAs, near-misses and incident reporting onsite.  iReport it.