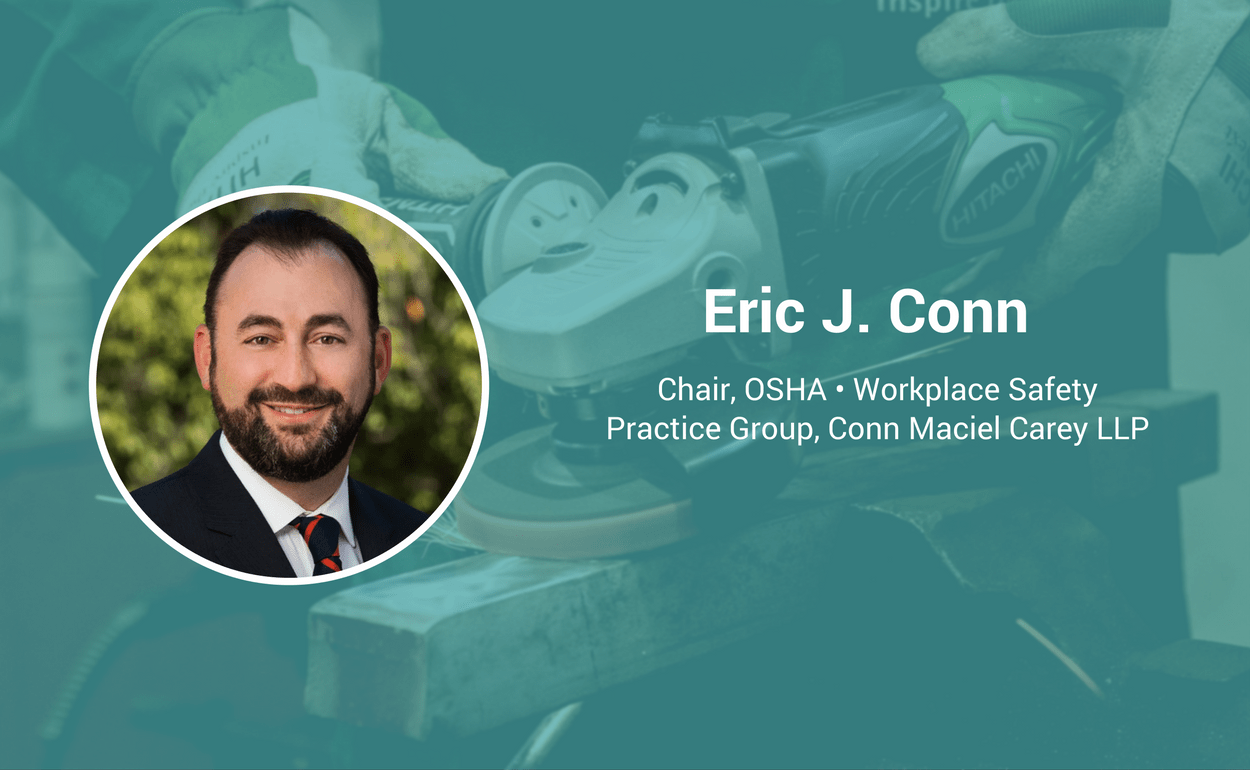 What are the top changes at OSHA you should be watching for as they may impact safety and compliance?

We sat down with Eric J. Conn, Chair of the OSHA ● Workplace Safety Practice Group at Conn Maciel Carey LLP, to talk about significant issues at OSHA to follow in the coming months.

He also responds to and manages investigations of catastrophic industrial, construction, and manufacturing workplace accidents, and handles all aspects of OSHA compliance and litigation.

Here’s an overview of what we uncovered. (Come back for part two in the series next week.)

1. Changes in Leadership at OSHA

One of the first things employers should be watching is OSHA leadership. “We’ve now gone the first year of the Trump administration without an appointed Assistant Secretary of Labor for OSHA,” says Conn.

“Up until this point, it has essentially been career folks at OSHA running the show. The landscape at OSHA has not looked a whole lot different during the first year of the Trump administration than it did at the tail end of the Obama administration. The real change at OSHA will come once political leadership is in place to start to implement the Trump agenda,” explains Conn.

Scott Mugno, the VP of Safety, Sustainability and Vehicle Maintenance with FedEx Ground, has been appointed to this position. In that role, he would have overall responsibility for OSHA.

Despite the fits and starts and long delays, Conn says he anticipates eventually, Mugno will receive Senate approval, and likely will be in place as OSHA’s Head by the end of the first quarter of the year.

“Then we will actually start to see the Trump administration agenda being implemented full throttle at OSHA,” explains Conn.

There are other personnel issues employers should be watching with the OSH Review Commission. (The review commission includes three commissioners who hear appeals of OSHA cases decided by the Commission’s administrative law judges.)

“For the first time in a long time, we have a Review Commission that is configured with two Republican-appointed commissioners,” says Conn.

And what might that mean for employers? It could be argued that recently we have seen a bias against employers in appeals, and now, presumably employers can get a fair shake on appeals that go before the OSH Review Commission, explains Conn.

“With Heather MacDougall as the Chairwoman of the OSH Review Commission and James Sullivan as a third commissioner, joining Cynthia Attwood, who is an Obama-appointed commissioner, we expect to see more pro-employer decisions coming out of the commission,” explains Conn.

Another issue to watch are the efforts by the Trump admiration to slash government regulations, also being referred to as Trump’s Deregulatory Agenda.

There has already been a little activity to undo several Obama-era OSHA regulations, repealed using the Congressional Review Act. There were also several executive orders and decisions made by the Trump administration that signaled a new direction.

“Rather than rulemaking, it was rule rescinding, and so in the next year, we look to see: How does the Trump administration advance that deregulatory agenda?” Said another way, stay tuned to see how OSHA implements Trump’s agenda to mitigate the regulatory impact on employers.

For example, there are likely going to be changes to OSHA’s new Electronic Recordkeeping Rule, which determines when and how employers submit injury and illness data to OSHA proactively through an electronic database. “My expectation is that Trump’s OSHA will reopen the E-Recordkeeping Rule and either rescind the rule, or more likely, narrow the scope of the data that larger employers are required to submit. My expectation is that, regardless of size, if employers are covered by the rule, it will require them to submit only their 300A annual summary data, rather than the more detailed injury data.”

Conn also would not be surprised to see the scope of the rule change to limit the number of employers covered by the rule.

3. Changes with the LOTO Standard

Another important rulemaking to track is one that could impact the oft-cited Lockout/Tagout (LOTO) Standard.  OSHA initiated a Standards Improvement Project (SIP) under the Clinton administration to make non-controversial changes to potentially confusing, outdated or duplicative OSHA standards. “The purpose was to address minor, non-controversial problems with rules,” adds Conn. “It has been a successful program that has cleaned up rules, and it’s generally been supported by industry, labor, and OSHA alike.”

In the current iteration of SIP (SIP IV), there are numerous proposed revisions to existing standards, including a change to OSHA’s LOTO standard. Specifically, OSHA is hoping to use SIP to undo a judicial interpretation of the term “unexpected energization” that OSHA does not support. In short, they are seeking to re-write the standard to remove the term “unexpected.”

Employers will be watching to see if Trump’s OSHA allows this change to LOTO, since it’s a significant change to the rule—and as of right now, it has been pushed all the way to the final rulemaking stage.

“Right now, as the Lockout/Tagout standard has been interpreted by the courts, employers are only required to implement Lockout/Tagout if unexpected energy creates a hazard to employees.” For example, if you have a piece of equipment that sounds a siren and flashes warning lights several seconds before restarting, then there is no scenario where the energization of that machine is unexpected. In those circumstances. where there is a forewarning the machine is going to start up, Lockout/Tagout is not required.

“That’s going to be a big deal to watch in the next year,” says Conn.

For example, states like California, Washington, Maryland and others are operating their own OSHA program—and they may feel a need to “pick up the slack,” says Conn.

OSHA is now requiring electronic submission of critical injury and illness records. Get the free download here to see how that impacts your company.

Save time, save money and save lives. iReport it!

Come back next week for part two in the series.