The Worst Kind of Safety Manager! 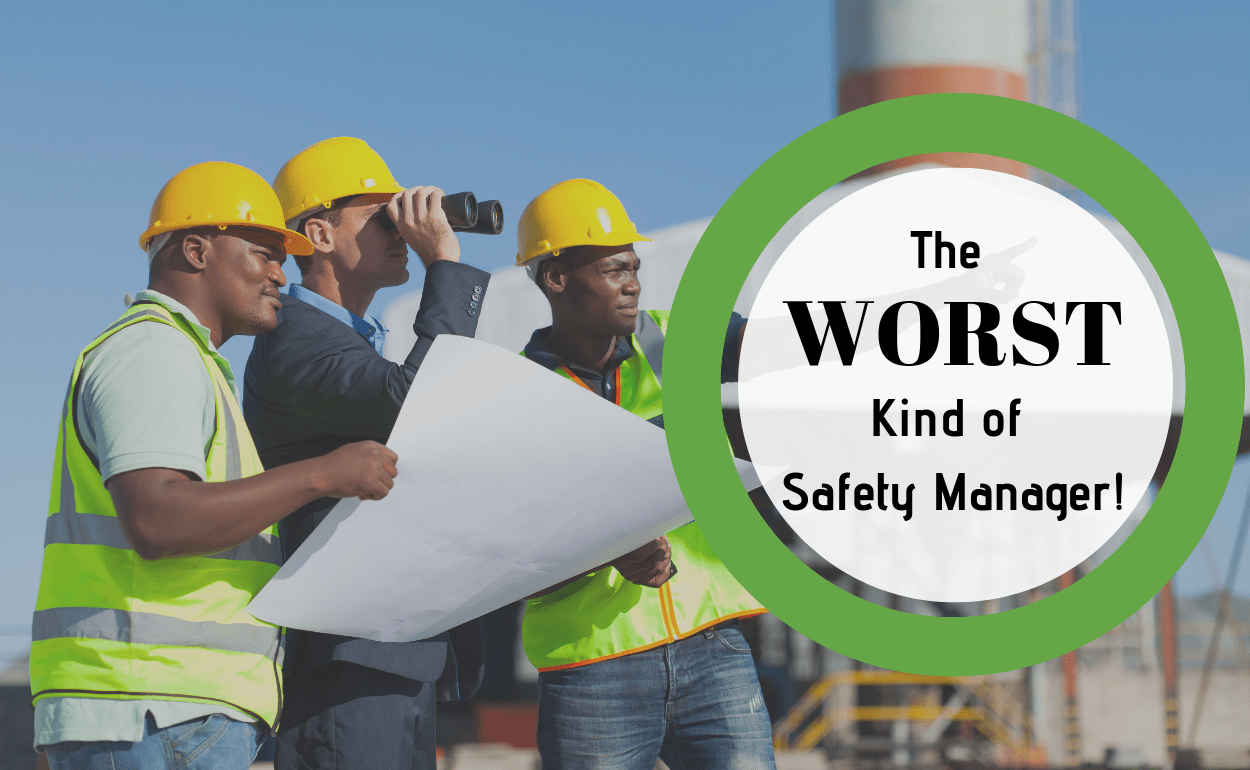 Unfortunately, many of us have experienced them: the kind of safety managers we don’t want to be like.

We’ve captured a few of the traits that can be found in some of the worst kinds of safety managers:

The “My Way or the Highway” Safety Manager

It’s best when safety is a collaborative effort that happens across the organization, but the “my way or the highway” manager works against this very idea. These kinds of managers can ignore feedback and rarely solicit any sort of input from other areas of the business.

It’s even more rare that they ask for feedback and communicate effectively with safety workers in their own department. After all, they know best!

A conversation with this type of safety manager feels like a one-way conversation, as this person tends not to listen to others. At their worst, this is a manager who provides very few opportunities for workers to participate in safety. The safety culture greatly suffers as a result.

Signs of the distrusting safety manager is a culture of “blame and shame.” This is also the safety manager that seems to be driven by distrust in others, seeing his people as hazards. If something goes wrong, he immediately points fingers at his people, instead of determining the “why” behind what happened.

In general, instead of equipping his people, he sees them as the problem. The result? This manager may lead a company that will meet compliance standards, but it won’t be a culture where people feel empowered to report potential hazards or risks.

These managers can do a great deal of damage in a culture that once was—or strives to be—empowering, proactive, or goal-oriented.

This is the manager that tells their people to act one way, but he doesn’t model or show that desired behavior. Instead of having safety as their primary compass to guide behavior, it’s unclear whether this manager truly uses safety to inform all his decisions, judgments and behaviors.

By not “modeling the way,” this manager does very little to teach, coach, or to hold people accountable. By his own actions, this manager ends up undermining his own authority.

The problem with this type of manager is that they don’t build trust, and they threaten the very foundation of a safety program within an organization. They can also allow obstacles or criticism to significantly impact their behavior and decision-making—which doesn’t go unnoticed by others.

When taken to an extreme, they can overly rely on what the majority wants, rather than what is best for safety and what is best for the organization as a whole. These can be some of the most destructive safety managers.

This is the safety leader who gets energy and motivation towards improving safety, but then seems to lose steam on the project after a quarter or two—or worse yet, just after a few months or weeks they seem to lose interest. Sometimes it can be extremely hard, if not impossible, to measure or monitor results of any safety program as a result.

This is difficult for others around this manager because they aren’t sure how to effectively support safety initiatives. They can interpret this lack of discipline as reactive, too…after all, that is how it feels.

When this kind of inconsistent and hard-to-read leadership happens repeatedly, employees can begin to question whether the safety initiatives are truly taken seriously or worth their efforts.

Ever work for someone who seems like they simply don’t have any knowledge or clarity on EHS principles? Arguably, nothing can take credibility away from a safety leader as much as a lack of knowledge around basic EHS principles and best practices. This can be even tougher to deal with if he doesn’t recognize his own incompetence.

The “Stuck in Neutral” Safety Manager

A phrase you’ll hear from this type of manager is, “That’s the way we’ve always done it.” Not only is this manager not forward-looking in nature, they don’t seem to be open to new ideas and processes.

When taken to the extreme, they are truly holding on to a past that is long gone. Often that past—or the historical way that safety has been managed in the company—is no longer working as effectively as it once was.

The problem for others is that this type of manager works against any kind of change and any kind of continual improvement in the organization. With that said, they may not recognize they are doing so, and outwardly, they might even claim to be supporters of continuous improvement. This isn’t someone who looks for opportunities to learn and grow, as an individual, for their teams, or for their organization.

The reality: You may see a manager with some sort of combination of these traits and behaviors. Sadly, an ineffective or dysfunctional manager may not fit just one type described here!

We can learn from dysfunctional managers so that we can better leaders ourselves. Top leaders praise employees for their work and coach them; respect them as people; solicit their ideas and feedback; communicate effectively with them; lead by example and see safety as a personal value; and they equip their people with tools that help them participate in safety. They trust their workers and they also intentionally take steps to motivate and empower their people.

What other traits have you found in an ineffective safety manager you’ve had to work alongside, or work for? Let us know!

iReportSource is one more way you can empower and equip your people to contribute and participate in safety. With iReport, every user you choose in the organization can have visibility into how each incident is progressing towards closure.

Not only can you drill down, track, and monitor specific activities in iReport, you have a real-time view of ALL your metrics that matter, too. That’s beneficial in helping you show tangible results and the ROI on safety investments.