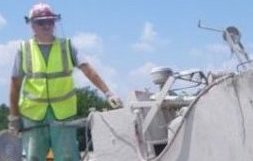 Doug Schuchhardt Safety Director for the Cincinnati/Dayton Branch of Ohio Concrete, Sawing, & Drilling, brings a practical, people-first approach to managing safety. As a previous field worker himself, Doug’s unique experiences in the field inspired him to create a culture of safety everywhere he worked. A graduate of the New York State Department of Corrections Academy, Doug brings a steadfast work ethic and “git ‘er done” approach to the workplace every day.

It sort of chose me…

I was offered a job at Messer Construction back in the 80s. I would make about $3.00 more than working at Burger King so I thought “Why not?” I was a laborer when I first started and as a laborer I was used to being a “Swiss Army Knife” – they had me doing anything and everything that needed to be done. A ton of on-the-job training. Some of that work included safety and training on certain P.P.E and equipment

A few months later, I received a letter from Ohio Concrete asking if I’d be interested in a position with them. I went in for an interview and on June 19, 1994 I joined the company. Again, I was kind of that Swiss Army Knife role where I was doing a bunch of different jobs. While I was working, I noticed that a lot of my teammates didn’t have the proper training they needed to be safe and perform at their best. So… I became a trainer myself to demonstrate proper equipment and P.P.E use for drilling concrete.

I decided I wanted to change the culture of the organization; to make sure that we were an organization that thought of safety as a way to keep our people safe and happy. I wanted to create a culture that made people excited to be safe, and to look out for each other.

Taking that job at Messer was one of the best decisions of my life because it set me on the path to where I am now.

Let me ask you a question: what do you think would work better… going to a job site, barking out orders and punishing people when they aren’t following the right safety protocols, or teaching people the right way to do things and the reason why they need to do them?

You could go to a job site and point out things and bark out orders, but no one will listen. People will shut you down and defy you just because you act like an ass. That doesn’t help anybody and you’ll be pretty bad at your job.

Safety Leaders have to talk with their people. You have to get to know them, and then explain to them why things need to be done in a certain way. You have to educate people about the real reasons behind following safety guidelines and to show them why safety is more than just a policy. That safety is a practical way to be a top performer without having to worry about injuring yourself or someone around you.

The best example is something really simple that almost all site workers must do: wear safety glasses. But why is it important? For starters.. have you ever tried sawing concrete without a pair of safety glasses on? You can’t see real well. You have to squint and stand all weird. It’s not effective and it’s really dangerous. But if you wear a pair of safety glasses, you can do the same job, much easier, effective, and safe.

Safety Leaders must take the time to properly educate their teams on the importance of safety or people could get hurt, and the organization could suffer.

There are two incidents that changed how I approach my role as an operator and a teacher.

The first one happened my first year on the job when I was sawing asphalt for a road job that we had. While I was sawing, one of the teeth on my saw blade came off. I was wearing a pair of jersey gloves and felt a little pressure on my thumb, but thought it was just a pebble or two from the road. Turns out the saw blade went straight through my glove, through my thumb and thumb bone, and straight out the other side!

When I was packing up my tools, I noticed that my thumb was really hurting. When I took off my glove, I noticed a small red blood spot and blood in my glove. I called my boss and told him I needed to get my thumb checked out. After going to urgent care, the doctor showed me the x-ray and clear as day, a hole was right in the middle of my bone. If I had been wearing the proper P.P.E (Leather) Gloves I would’ve had no trouble.

The next incident occurred a few years later. I was working at a job site sawing some concrete floors. It turns out that the floor had electrical wiring right under where I was sawing. My blade hit the wires, and a current flew straight through me. Luckily, I was wearing rubber boots and gloves and was grounded because of it. I was fine, but the concrete was sparking and shooting out flames!

Those two events showed me first-hand just how important the proper safety equipment can be. It made me realize that, even with modern day protection, things can go wrong, but the simplest of things, like the right gloves or boots, can make the difference between life and death.

Safety is more than a position, a saying, or a process – it’s EVERYTHING. Safety impacts more than just the person working at a site. It protects families, companies, coworkers, and friends from a potentially devastating outcome. I always tell our teams – “You’re not being safe only for you… you’re being safe for your family and your friends.”

My safety superpower is relatability. I’ve been on every side of the safety equation. I’ve been out in the field for most of my career, wearing the PPE gear and protecting myself as a worker. I’ve been on the training side, demonstrating safety gear, and teaching proper use. Because of my first-hand experience, I can speak directly to my team as a peer, as someone that’s been there and experienced how the simplest safety protocol can make the biggest impact.

That understanding and experience ensure that my team and I work really well together. They know I’ve been there, and that I’m only telling them to do something that I’ve done myself. I would never have someone do something that I wouldn’t do, or haven’t done, myself.