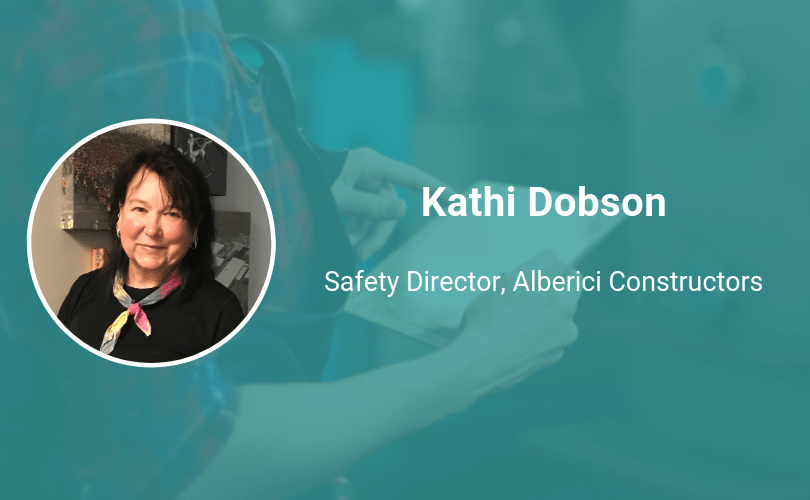 Ask Kathi Dobson, Safety Director for Alberici Constructors, how she got into safety and she’ll tell you that looking back, she might have not been the best person (at the time!) for the job, but she is glad she was given a chance.

(Alberici Constructors is a diversified construction company recognized for its strong execution of projects throughout North America. Founded in 1918, Alberici has built a legacy of rock-solid reliability through the work of our employees, who deliver each project with quality, excellence and integrity.)

“Before I was a safety rep, I was laid off from a job in manufacturing where I was performing a combination of roles – occupational health nurse, risk management, implementation team leader for training new hires and experienced workers, but I had never held a position which was purely ‘safety.’ When I was hired by Alberici, I had an OSHA 10 hour card, had sat through an ASP prep course, and had been on several inspections as part of an audit team. So…not much,” she says.

She explains that was she was able to do was to communicate their observation process, which was behavior-based, and what the company was looking for as part of their safe work efforts and safety program.

“In retrospect, I was probably the wrong person for the job, but I was very interested and engaged, and learned a lot from my initial project team – they obviously saw something in me that showed I could be successful in that role.”

That was 20 years ago, and Kathi credits that “early inexperience” as what gave her some great opportunities to grow personally and professionally over the years.

Both Kathi and Alberici are passionate about and committed to safety. Keep reading Kathi’s spotlight to see the mentor that’s helped shape her, and why she says you have to be a “a confidante, a coach and a counselor” as a safety leader today.

My original approach to “safety” in construction was to argue, quote standards and get mad when someone violated work rules or disagreed with my decisions. I was very fortunate to work with a team, especially one of the superintendents, who encouraged me to learn who the workers were – what made them tick, what was important to them, and why they worked the way they did.

When I was able to personalize safety for the workers I was around, it made everything fall into place, and it made me a trusted ally instead of someone people would avoid. And when I realized that even the most inexperienced worker knew more about the tasks they were performing than I did, and gave up a little control; my work, my relationships at work and my learning curve in construction and safety improved exponentially.

My most trusted mentor is probably the person who originally hired me to work for Alberici. As a project director, he had experience in nearly every role in operations, including that of a safety coordinator. Whenever I had difficult issues I was facing, he was able to support my decisions. Sometimes he would question my decisions and be the “devil’s advocate” to see if I was truly comfortable and confident with my thought processes.

He often challenged me to push myself and to do more, through education, advocacy, or alliances. I really learned to understand that to be a safety leader, you have to be a confidante, a coach and a counselor as well as a resource and I learned to sell to my audience under his tutelage.

Is there a company (other than the one you work for) that you admire in terms of their approach towards safety?

Although I have no single company I’d want to identify whose safety efforts I admire, I do appreciate companies who really understand the safe work culture within their organization and who have embraced the tenets of an occupational health and safety management system. I also admire those companies who take their safety culture “on the road”, and into their homes and communities.

I’m a safety advocate, especially for women in construction; and (I hope) an influencer.