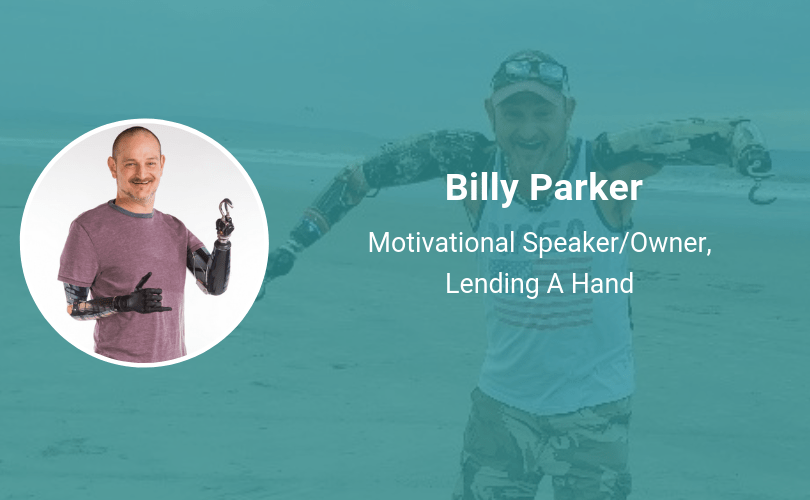 Billy Parker is a Safety Hero who had an incident that truly changed his life forever.

“I lost both arms above the elbow because I didn’t use the OSHA standard LOTO when I was cleaning out a machine, one January morning,” he tells us.

Today, Bill says he is grateful for the experience and he says it is what has given him the ability to help inspire others to respect safety across the nation.

One thing is true: Billy’s experience, passion, energy, caring demeanor, and authenticity all make him a one-of-a-kind, honorable, and memorable safety leader.

Continue reading to see how the incident happened, how Billy overcame it, and what he does currently through his business, Lending a Hand, LLC.

How did your career in safety start?

I never had a career in safety. I do remember about halfway into my 21plus years of welding I was lucky to get a job in the local sheet metal trade, and in doing so, I was really introduced to safety in the workplace. We trained on all the machinery we had sometimes quarterly depends on the machine. We had a lot of OSHA training from confined space to LOTO we also had toolbox talks most mornings.

We trained so much sometimes getting certified in certain areas that we just stayed aware of what was going on. I never even got a paper cut in the ten years I was in the trade.

Yes! January 23 2007. Wow! What a day. That day changed my outlook on safety and my entire life. I was laid off at my previous welding job and actually found another job in welding about a month or so later.

I was hired in as a welding shop foreman, and the first thing I notice was there was no safety program or any kind of safety measures at all. I tried to implement some of the safety training to my current job but that was not successful, my bosses would fight me every step of the way. I was there for almost 3 years when that Tuesday rolled around.

January 23, 2007 was the day I took a shortcut at work and tried to clean a Drywall Shredder while it was still running instead of using LOTO. In the blink of an eye I was fighting for my life. The running machine caught both my hands and started pulling me in pretty quick. Although there were coworkers standing around all the screaming and yelling, I realized that I had to get out, so I pulled myself out of the machine.

I lost both arms above the elbow and came very close to losing my life that day. That day not only changed my life, it affected everyone in my life one way or another.

I lost my arms at 39 years old. I was also a single father to my son Cody. He was 15 at the time. I had him since he was nine years old and I had to take care of him. I was lost the first few years with no arms—after all, I worked with my hands all my life as a welder, and that’s all I knew and was damn good at it.

I remember a friend telling me, “Billy you may have lost your arms, but you still have a brain.” I’ve always been a positive guy and knew I would figure it out some how. I wanted to use my injury for something good…I just didn’t know what that was.

As I’m trying to figure out what to do, my brother, David Parker ,called me up and asked if I would be willing to come out to his work and talk to his guys about my injury and how it happened, because his guys were not doing their job in a safe manner.

I was there 10 minutes, and was a nervous wreck, I felt like I bombed big time. As I’m walking out the door a gentleman by the name of Doug Oskin caught me at the door and told me that I have an awesome story, and that if I worked on it a little bit and practice talking in front of people, that I could help a lot of folks out, maybe even save a limb or a life.

I thought about it for a week or so, and decided to do it. I started working on it. I was able to get in touch with a friend Craig that works for Dow Chemical and he let me come and tell his guys my story and practice pro bono, of course.

After a month of doing that, I decided to try and get my name out there just to see if I could help other companies, too.

I now travel all over the United States and tell my story to try to help in anyway I can to keep folks SAFE in the workplace. I get most of my work by word of mouth. I’ve had such good results that I started a company called Lending A Hand.

I received a lot of help to get to where I’m at in my life and can’t just give the credit to myself or one person.

Well, I am the AMP MAN! I have a way of telling a story and connecting with folks. I do as much as I can to keep “limbs and lives safe in the workplace”!