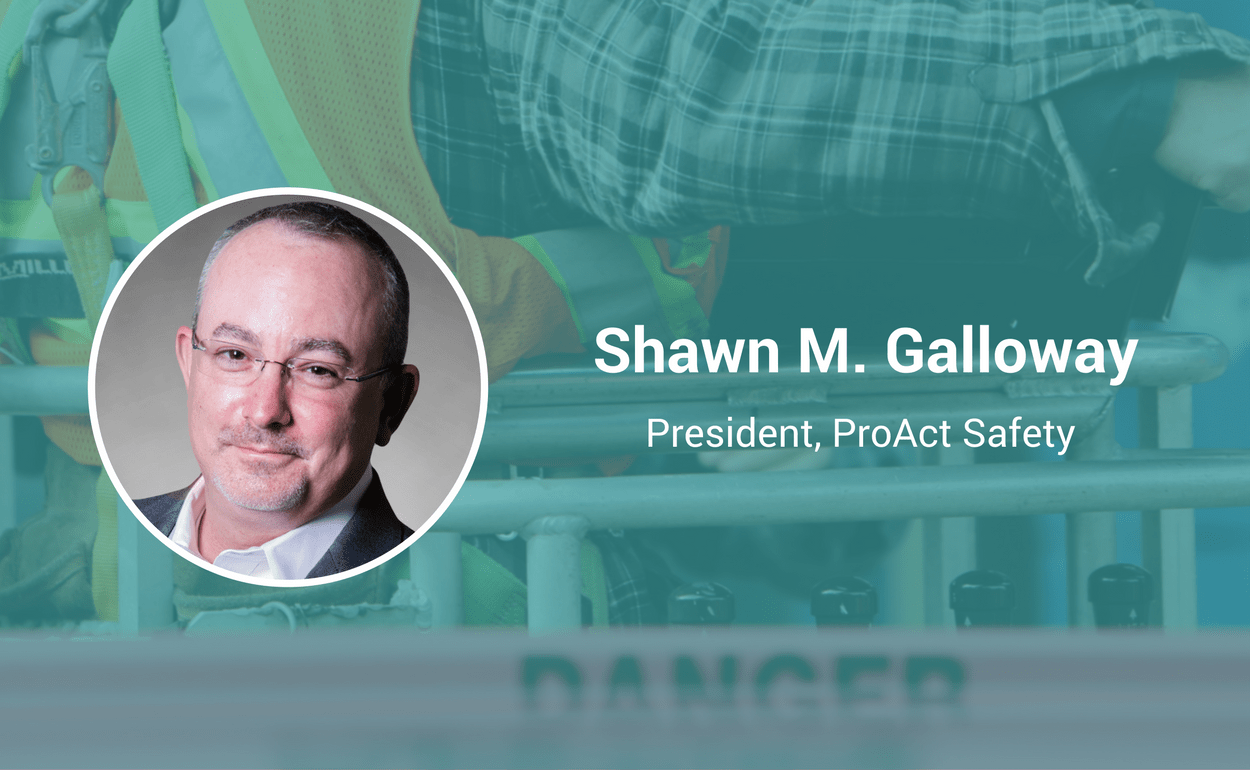 When trying to help your people to do their best, there’s a three-step process from a performance management standpoint, says Shawn M. Galloway, President of ProAct Safety and co-author of several bestselling books, including STEPS to Safety Culture Excellence.

As a consultant, advisor, podcast host, and keynote speaker, Galloway has helped hundreds of organizations, across every major industry around the world, achieve and sustain excellence in performance and culture. EHS Today magazine has listed Galloway in The 50 People Who Most Influenced EHS and ISHN magazine has listed him in the POWER 101 – Leaders of the EHS World and in the Elite List of Up and Coming Thought Leaders.

Keeping this in mind to guide our conversation, we spoke with Galloway about how high-performing cultures get the most effort out of their people. Here’s what we learned about shaping performance in individuals.

1. Identify what you want people to do.

There can be so many things going on in any given organization, often workers can be confused or they can be missing information altogether.

“A simple way to kind of look at this, is what does ‘more effort’ look like?”

“I was with one organization and the executive team was talking about increasing engagement. Individually, during coffee breaks, I asked them what the engagement would look like if we had more of it. There were seven leaders and I got six distinctly different answers,” says Galloway.

“So when we talk about getting more out of people, look to behaviorally define, what does more look like?” Then also be sure to identify why people wouldn’t be doing these behaviors, to do begin with. “What are the things that make it difficult or impossible, that we might be doing unintentionally, that’s demotivating the desired performance that we want?” says Galloway.

Galloway shares the story of a long-haul trucking company that was experiencing a significant amount of side-impact collisions. Through data analysis, they found one precautionary behavior could eliminate 73 percent of these incidents.

“To avoid these events, they wanted the drivers to engage their turn signal and listen for the audible clicking sound three times prior to looking in their mirror to begin to change lanes.” The result? “They could see and be seen more effectively, and safety results improved drastically.”

2. Communicate it clearly and consistently.

Even the best leaders (and highest performing-cultures) can struggle with communication. “Communication is a process, not an event. It involves a sender and a receiver, and both have to be tuned in and turned on to the message,” says Galloway. Galloway quotes George Bernard Shaw, the Irish playwright, who said, “The single biggest problem in communication is the illusion that it’s taken place.”

Maybe it is posting information online, to a wall, or sending off an email—whatever it may be—don’t assume people are always hearing the message. Encourage multiple formats of sending important pieces of communication, and when possible set up systems that support communication.

“One of our clients identified six questions to be asked and answered every time maintenance work was to be performed in order to prevent the vast majority of injuries they were experiencing among their workforce. They placed the questions on a laminated pocket card and gave it to all 88 employees,” says Galloway.

During the first month, those who had the card on their person when approached would receive a ticket to enter a drawing with small gift prizes. The second and third month, when employees were approached, they were asked to name two of the questions on the card. Those who could were entered into the drawing.

“Nine months later, all of the employees could recite all six questions from memory.” Put simply, clear and consistent communication—combined with reinforcement—helped the company to make sure people were getting the message.

3. Make sure workers know what happens when they do it.

It tends to be easier to call-out or discipline workers when the wrong behaviors occur, but be sure your organization is set up to respond to, reward, and reinforce the right behaviors, too. “While most organizations have progressive discipline, I see that not enough have progressive recognition practices in place. If those you lead are demonstrating the desired behaviors, what positive consequences follow?”

Sometimes simply verbally recognizing this behavior is sufficient, as it is so often lacking, says Galloway, but look for ongoing, unexpected and expected ways of reinforcing the right behaviors.

4. …And make sure workers know what happens when they don’t.

In any organization, there has to be knowledge that consequences will occur for unacceptable behavior. Of course positive consequences should be aligned with positive behaviors/results, and negative consequences are more effective at getting rid of the wrong kind of behaviors. At the same time, just because you get rid of a “wrong” behavior doesn’t mean you necessarily replace it or support the desired behavior you want to see.

In high-performing cultures, the expectations for safety are clear and revolve around zero incidents and injuries, says Galloway. “However, ask yourself, do people know precisely what is expected of them to make that a reality?”

It’s Not Always About Doing More

To evolve a culture, and to get to a place with greater performance and more of the right kinds of results, it doesn’t always mean you need to do more. “Greater performance doesn’t come from more resources, more programs, or more activities,” argues Galloway. Rather, it’s by focus over time.

W. Edwards Deming taught us, “It is not enough to do your best; you must know what to do, and then do your best.”

When that kind of laser focus happens, alignment across the organization will increase and workers will begin to show up each day with more purpose and intention.

“The awareness starts to increase. You start to tease out those who are unwilling to carry out certain behaviors [or that don’t fit the culture]. But it also helps you prioritize and be much more strategic to say, ‘This is what success looks like in performance and employee behavior, supervisor behavior, and manager behavior.’”

Lay the Foundation for a Stronger Safety Culture

iReportSource lays the foundation for shaping a world class safety program. Your insurance premiums are based on lagging indicators; It’s our goal to help demonstrate to your insurance carrier that you are being diligent in your efforts to provide a safe workplace through recording leading indicators – your proactive activities.

Stay tuned for our next conversation from Galloway, where we break down what it takes to make behavior-based safety work.