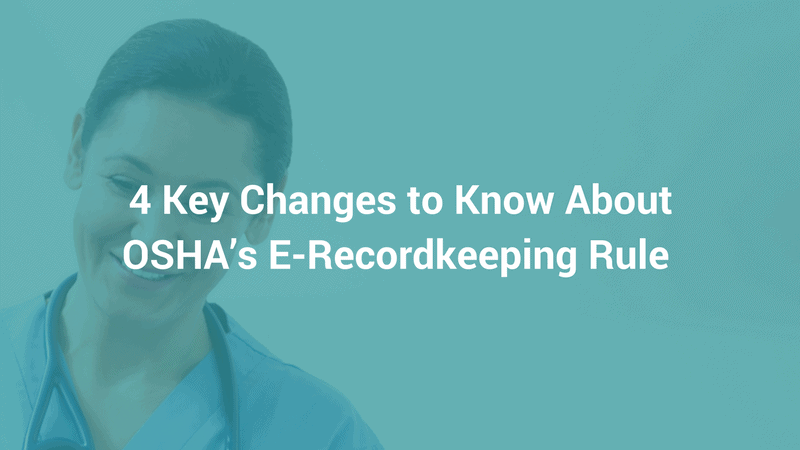 “There’s a lot employers should know about the changes to the E-Recordkeeping Rule, and there are steps they can take now,” says Eric J. Conn, Chair of the OSHA Workplace Safety Practice Group at Conn Maciel Carey.

Conn focuses his practice on all aspects of occupational safety and health law, which includes representing employers in inspections, investigations and enforcement actions involving OSHA, CSB, MSHA, and EPA. He also responds to and manages investigations of catastrophic industrial, construction, and manufacturing workplace accidents, and handles all aspects of OSHA litigation— from criminal prosecutions to appeals of citations.
We sat down with Conn to talk about the basics of OSHA’s new Electronic Injury and Illness Recordkeeping Rule and what employers should know going forward.

To understand the Electronic Injury & Illness Recordkeeping Rule today, it helps to look back at why the requirement came about.

Since the beginning days of OSHA in the 1970s, employers have had an obligation to monitor and record certain types of relatively serious work-related injuries. “They’ve also had an obligation to track them on a set of recordkeeping logs. The OSHA 300 log is the foundational document, and from that log you develop detailed incident reports for every injury that appears on the log,” explains Conn. “Then, at the end of the year, an employer would prepare an annual summary report of all of the different types of injuries that are required to be reported.”

How OSHA Recordkeeping & Reporting Has Evolved

“Historically, employers posted that information on a bulletin board for a couple of months each year, for their own employees to digest, and then kept them locked away in a file cabinet in the HR or Safety Office for five years, until they could be thrown out,” explains Conn.

Today, OSHA’s new rule requires hundreds of thousands of workplaces to proactively submit these previously private records to OSHA. “Again, it used to be an internal matter, unless you had an active OSHA inspection, or unless OSHA or the U.S. Bureau of Labor Statistics asked you on a periodic and random basis to supply them with specific data from a particular year. Now this has changed,” says Conn.

Conn explains, at a high level, the 4 key, up-to-date changes to know about right now include:

Put simply: Now employers in certain categories are required to share their injury and illness data every year with OSHA. That includes companies with 250+ workers submitting 300 Logs, 301 Incident Reports, and 300A Annual Summaries.

Additionally, as described above, establishments that have 20+ workers in “high hazard industries” also must annually submit just their 300A Annual Summaries.

…But Don’t Get Confused

But this is where some employers can get confused. The E-Recordkeeping Rule does require those large employers to submit 300 Logs, 301 Incident Reports, and 300A Annual Summaries—but that’s not in the first year.

Said another way, the upcoming deadline, at the end of December 2017, is the submission date for the first year of the rule, and for this first year, no matter your workplace size, the Rule only requires submission of your 300A Annual Summary data, not the other data described above.

“This was the first year that this rule was in effect, and the deadline for that rule was a moving target,” says Conn. “It was originally set for July 1 of this year.  Then it was delayed indefinitely. And then it was proposed to be moved to December 1 of this year, and then it was finally moved to December 15 of this year—and now OSHA has said that although the deadline has passed, they will continue to accept the first set of data that was due to be submitted to OSHA through the final minute of December 31, 2017.” Stay tuned for more potential updates to the rule, says Conn.

What’s the Impact on Employers?

The E-Recordkeeping changes quadruple the number of employers required to submit injury data to the Department of Labor. OSHA projected that sites that have more than 250 employees that will share their injury data with OSHA will increase from roughly 38,000 to 129,000, and OSHA anticipates receiving detail about 1,325,000 individual injuries and illnesses.

In terms of those sites in the range of 20-249 workers in high hazard industries, OSHA expects to see data from up to 440,000 sites, explains Conn. “More than half a million workplaces in the country will now be actively submitting information about their work-related injuries to OSHA on an annual basis,” he says.

What Happens If You Don’t Comply?

“You now have until the stroke of midnight on New Year’s Eve 2017 to submit your first set of data, and OSHA will not give any citations for late reporting to any employer who submits data up until that point,” says Conn. There are three ways to submit your data to the Injury Tracking Application (ITA) portal: manual entry, CSV file upload, and third party software—where the tools facilitate filing for you.

But what happens if you aren’t compliant?

This is a new rule that has been added to OSHA’s portfolio of standards and regulations that are all individually subject to citation and civil penalty.

It’s in the same category of regulations for which OSHA routinely issues citations for failing to record workplace injuries on the log, for failing to accurately record injuries on a log, and for failing to maintain the log for five years, as required. (Those result in citations and civil penalties.) “So it strikes me that OSHA would intend to enforce this rule the same way it enforces other recordkeeping requirements, that is, by citation and penalty.”

The real risk to employers is after you get an initial violation on the books, even though recordkeeping violations are typically considered “other than serious,” and even though the penalty may be small in nature, the second violation could be characterized as a Repeat or Willful violation. “And you see repeat and willful recordkeeping violations all the time, and they carry penalties that are now up to $126,000 per violation,” explains Conn. “So you could say it’s not the first late submission, or the failure to submit, that’s going to bite you, it’s the second one.”

iReportSource allows you to easily comply with OSHA’s Injury Tracking Application. You can automatically generate OSHA Logs to quickly and easily submit reports to maintain standards.

Learn more about how iReportSource can complete your OSHA logs automatically: contact us today.